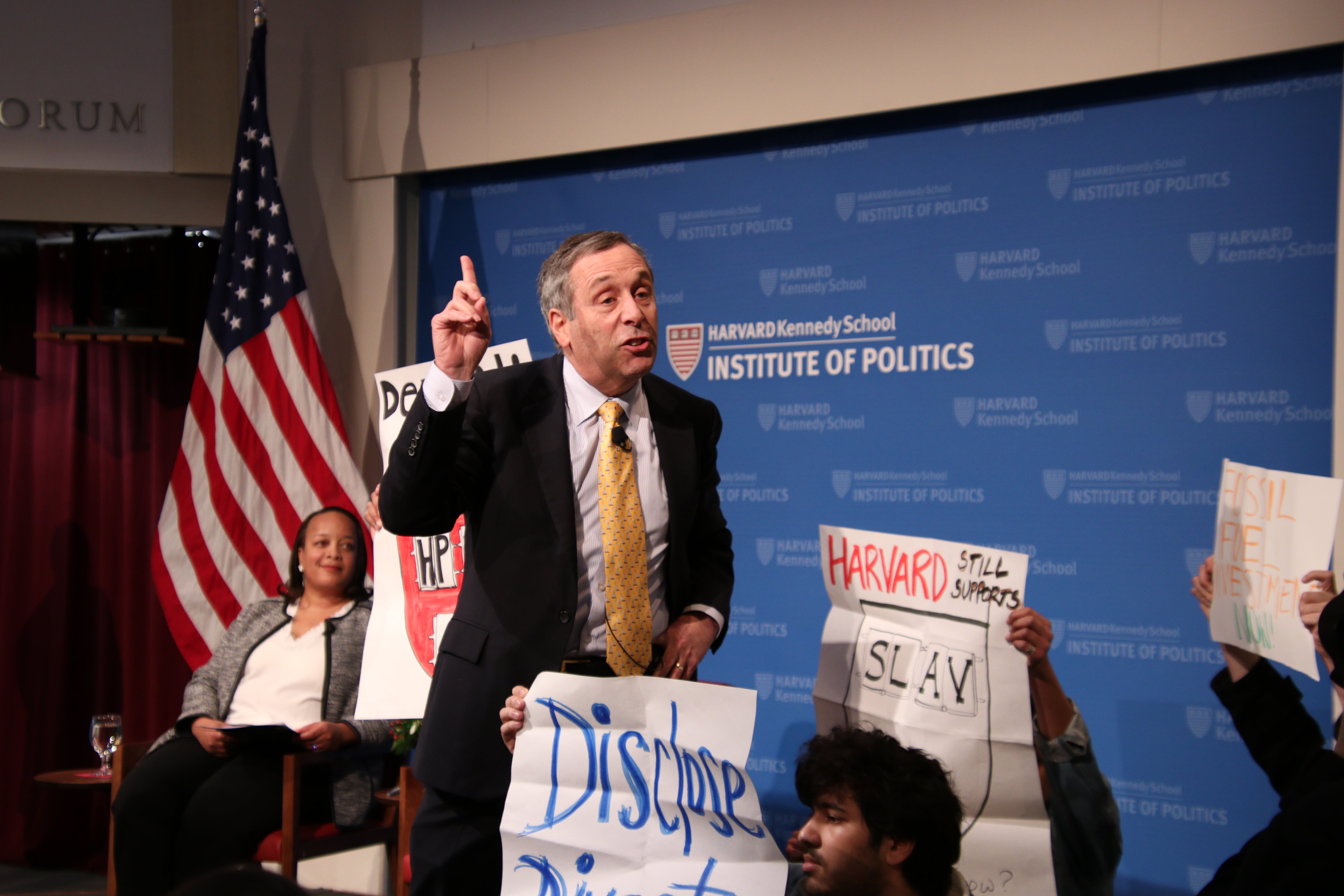 A bevy of campus controversies — ranging from a high-profile lawsuit alleging Harvard’s admissions practices are unjust to charges that high-profile faculty members committed sexual misconduct — drew national attention during the Class of 2019’s time in Cambridge. Nonetheless, seniors’ opinions of campus life remain largely consistent with those reported in previous years. Respondents are supportive of race-conscious affirmative action, while more than half oppose Harvard’s efforts to penalize members of single-gender social organizations. Three in four seniors think that the #MeToo movement has increased their awareness of issues of sexual misconduct, a majority of the Class of 2019 wants the University to divest its endowment from fossil fuels and private prisons.

Around half of students — 49 percent — hold favorable views of former Undergraduate Council President Catherine L. Zhang ’19 and Vice President Nicholas D. Boucher ’19. A slightly smaller number — 42 percent — said they have no opinion on either student leader.

Long-running challenges to race-based affirmative action in American college admissions came to a head in late 2018 when a lawsuit challenging Harvard’s use of race in its admission process went to court. The three-week-long trial — held at the federal district court in downtown Boston — saw a parade of statistical experts and top University administrators testify regarding allegations that Harvard’s admissions process is discriminatory. Five College students also spoke at the trial, drawing on their personal experiences to argue that a race-blind admissions process would harm diversity at Harvard.

It’s pretty clear how the Class of 2019 feels about the whole debacle. Overall, the vast majority of Harvard seniors — 74 percent — reported a favorable view of race-conscious affirmative action. Only eight percent said they had an unfavorable opinion.

Two years after the #MeToo movement skyrocketed to national attention, discussions around sexual harassment and assault continue to occupy center stage on Harvard’s campus. Earlier this month, FAS Dean Claudine Gay announced that former Government Professor Jorge I. Dominguez would be stripped of his emeritus status and barred from campus following the conclusion of a months-long investigation into allegations he had committed sexual misconduct. The University will also commission an external review of the broader institutional circumstances that permitted Dominguez’s behavior. Separately, the University is continuing to probe multiple allegations of sexual harassment against Economics Professor Roland G. Fryer, Jr. The Crimson first reported the existence of these allegations and the University’s investigations in May 2018.

Around 90 percent of surveyed seniors said the #MeToo movement — which coincided with a 20 percent increase in reports of sexual misconduct at Harvard — increased their awareness of problems of sexual harassment, marking a roughly 25 percent rise from last year. Consistent with last year’s data, 22 percent of seniors indicated they had been sexually harassed during their time at Harvard. One in ten seniors said they had been sexually assaulted.

Student concern over former Winthrop Faculty Dean Ronald S. Sullivan, Jr.’s decision to represent Hollywood magnate Harvey Weinstein in a high-profile rape trial roiled Harvard’s campus this past semester. Activists argued that Sullivan’s work defending Weinstein would be incompatible with his job as a faculty dean — a role that involves serving as a resource for victims of sexual misconduct. Sullivan, who heads the Law School’s Criminal Justice Institute, wrote to Winthrop affiliates that his work was motivated by the need to defend the “unpopular defendant.”

Following months of controversy that included vandalism, calls to Harvard police, and a defamation lawsuit against another House dean, Dean of the College Rakesh Khurana announced that Harvard would not renew Sullivan and his wife Stephanie Robinson’s contracts as Winthrop faculty deans. In his email to Winthrop students, Khurana cited a deteriorating house “climate” and a “noticeable lack of faculty dean presence during critical moments” as reasons for his decision.

The Class of 2019 largely seems to have picked a side in the debate. Overall, 62 percent of surveyed seniors said they view Sullivan’s decision to represent Harvey Weinstein unfavorably. Just 18 percent said they view his decision favorably.

A day before Khurana’s announcement, The Crimson reported that Winthrop staff and students had repeatedly raised issues with College officials over “a climate of hostility and suspicion” in Winthrop years before Sullivan’s decision to represent Weinstein. According to Winthrop affiliates, Sullivan and Robinson created a difficult work environment and targeted tutors perceived as disloyal.

Sixty-two percent of seniors have a favorable opinion of University Dining Services, while 28 percent have an unfavorable view.

A larger majority of students — sixty-four percent — believe that Harvard should divest from private prisons. Twelve percent hold the opposite view.

Students are largely ambivalent about the newly formed graduate student labor union, Harvard Graduate Students Union-United Auto Workers, that represents teaching and research assistants at the University. Forty-eight percent of students indicated they do not have an opinion of HGSU-UAW — which is currently locked in contract negotiations with Harvard’s top brass — while 34 percent indicated favorable views. Eighteen percent said they view the union unfavorably.

Following a formal Dec. 2017 decision, Harvard has moved with full speed to implement policies penalizing members of single-gender social groups. The sanctions, which went into effect for the Class of 2021, bar members of single-gender groups from serving as captains of varsity athletic teams, from holding leadership positions in extracurricular organizations, and from receiving College endorsements for certain post-graduate fellowships.

As in years past, a majority of seniors — 52 percent — view single-gender final clubs, sororities, and fraternities negatively. Twenty-nine percent view these organizations favorably. At the same time, over half of seniors — 51 percent — hold an unfavorable view of the University’s sanctions, compared with 47 percent of last year’s graduating class. Thirty-four percent reported a positive view of the sanctions

Almost half of all seniors — 44 percent — report that they sought mental health support from University Health Services during their time at Harvard, marking a slight increase from last year. Smaller numbers also turned to off-campus professionals, the Bureau of Study Counsel, and on-campus peer support groups — clocking in at 20 percent, 13 percent, and 10 percent of respondents, respectively.

Last fall marked the opening of the newly renamed Smith Campus Center, following a two-and-a-half year overhaul of the lobby and top floor of the Mass. Ave. building. Seniors almost universally view the renovated center positively, with 91 percent reporting a favorable opinion of the center.

More than half of Harvard seniors — 54 percent — view The Crimson favorably, while 26 percent view the paper unfavorably. This compares with 49 percent and 12 percent in 2018.

A significant majority of seniors — 67 percent — view the Harvard Lampoon unfavorably, while just 13 percent view it favorably. Last year, 58 percent of graduating seniors said they viewed the Lampoon unfavorably, while 17 percent of the Class of 2018 said they took a favorable view of the semi-secret Sorrento Square social organization that used to occasionally publish a so-called humor magazine. The Lampoon recently came under fire for publishing a “sexualized” image of Holocaust victim Anne Frank photoshopped over a bikini, which the Anti-Defamation League of New England said “trivializ[es] genocide” and “denigrates” Holocaust victims. Lampoon editors subsequently apologized for printing the image in a statement and vowed to overhaul their editorial procedures.