Advertisement
An Interview with Alexandra A. Petri
by Libby R. Coleman and Petey E. Menz

Alexandra A. Petri ’10, a comedic op-ed writer on the Washington Post, talks to FM about Hasty Pudding puns, her favorite humorists, and life metaphors. 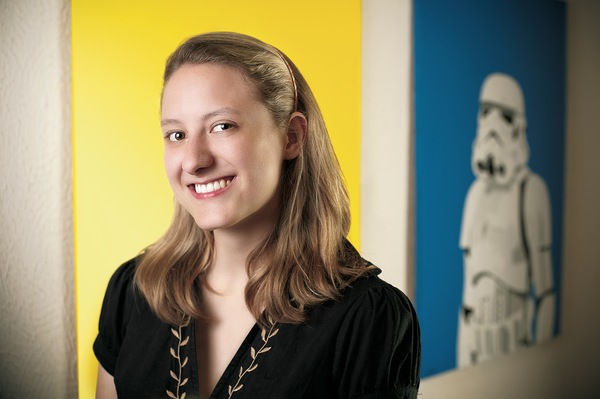 Fifteen Minutes: What was the comedy scene like when you were at Harvard?

Alexandra A. Petri: There were a couple definite sort of “within the scene” sort of scenes. There was the Lampoon, there was the Pudding, and then there was the fledgling Harvard Stand Up Comedy Society, and then there was On Harvard Time, and the sort of the TV-type deals. And that was, I think, about all the different food groups of comedy that we had. At The Crimson, there were people doing comedic things as well, sort of. But the main branches were as described.

FM: Who was your favorite Hasty Pudding character to write?

AP: Name-wise, “Hades Pantsaretight” was probably my favorite because that’s literally the worst name ever conceived by a human being and his entire character was that his pants were too tight, which prevented him—spoiler alert, not really—from having, what’s the word? Viable sperm! That’s the word. So anyway, he was fun. There was also a character who rhymed. Never write characters who only speak in rhyme, they’re really annoying. Dr. Zeus, least favorite character to write for.

FM: How did you start writing comedic op-eds and blogs?

AP: I read a lot of [James] Thurber growing up. Thurber is sort of the gateway drug as far as comedic writers go. He’s the marijuana and then you get into the harder stuff, and you have to read S.J. Perelman, and you’re like, “What even was that? I don’t understand it.What a weird time.” But I had always been sort of reading things that were in the comedic op-ed format. Obviously, Dave Barry was on my toilet and in my heart growing up a great deal. Getting to The Crimson and later to The Post, it was a form that I had been reading a lot and that came out when I set pen or cursor to paper or pixelated space, as the case might be.

AP: You know, no I didn’t—I mean yes, yes I definitely did, employer, if you’re reading this, and I’ve always been super up on it. No, I’ve always read the paper from the comic backwards. The comics are such a weird microscopic vintage world that’s preserved in the context of the modern newspaper. All these people have been stuck in the 1950s like Beetle Bailey, all these people, they haven’t been deployed, they’ve been at camp for the past 70 years. It’s a serious “Don’t Ask, Don’t Tell” situation going on in there. It’s like, that joke is no longer valid, that’s how long they’ve been there and so, it’s just crazy. I would always read that and at first I was like, “This is how the world really is,” and now I’m just like, “What is going on?” Then the advice columns, and then I would sit down and actually read the regular news, starting with the opinions. So, definitely, keeping up on the news has always been something I’ve done, but I sort of slid into it. I never dove straight into A1, like the cool news-reading public usually does.

FM: What other comedians do you look up to?

AP: I’m a big fan of Mitch Hedberg because, whenever you see somebody who says something and you’re like, “Oh, I should’ve said that,” and it has its own apparent logic to it, where it’s like A to B sort of sentences... I love so many—Mark Twain… Oscar Wilde was my lifelong love growing up—both dead and gay. Usually, the guys I had crushes on were only one of the two, but [Wilde] was the difecta and I literally read everything he’s ever written, except for some of the poems, which are crap. But the letters, the essays, the books and plays, you name it. And he gave this weird lecture tour of America where he told them their interior design was bad and insulted their landscapes and it was great. And so, yeah he’s definitely up there. I’m going through my bookshelf right now—Twain, Thurber, Wilde…. Benchley—now—I’m super hooked on Benchley because he just does like 750-word short humor pieces. Oh, Wodehouse! Wodehouse is another of those contagious writers that, once you’ve read him, you can’t write something that doesn’t sound like the pastiche unless you go read Chaucer for hours and hours. Chaucer is supposed to be a palate cleanser according to one professor I had, but I’m not sure how much I buy it.

FM: When did you start thinking about comedy as a career and can you remember the first comedic thing you wrote?

AP: Well, intentionally comedic? Intentionally comedic is harder to remember. As a kid, I had this grandiose, Shakespearean delusion that I always thought that what my second grade class really needed to be doing was to be putting on “Macbeth,” and I needed to be playing Macbeth, and this just needed to happen. I kept trying to rewrite it in a way that made it accessible to our audience, so I was Macbeth, and we were all cats for some reason. I also did short plays and essays. Actually, in high school, I started a humor magazine called “The Perturbed Squirrel,” where we just did Onion-style parodies. I did stand up as well, and I’ve always enjoyed being able to stand up in front of people and have them stare at you oddly, and possibly laugh, but definitely sort of stare. I think I was flabbergasted that [writing like the “Onion”] was a possibility, flabbergasted and delighted. It was always something I knew I wanted to do—write in some format—and whether that came out funny or not, that was just the dream. Even if I weren’t writing humor, I would definitely be writing.

FM: In your 2010 Ivy Oration, you said that “elevators are life.” Are there any other metaphors you would like to share with us?

AP: I never metaphor I didn’t like. That doesn’t really make sense but… let’s see. Life is like a...window, I’m standing near one now. No, wait. Life is like a shoe, because sometimes, you really stick your foot in it… Life is like a cat: if you take your neighbors’, the police will come and interview you. Life is like a chair, I like being in it.

FM: What is journalism?

AP: Journalism, I mean other than dying, which it’s been doing spectacularly over the past 800 years. It’s like the town crier is gonna—“all this aggregation is gonna ruin news!” One man just standing there yelling the news with a bell, we’re supposed to have individual telling of news by word of mouth, the way our fathers did it. And then, all the printing presses... Journalism is like a hot bath, nobody takes those anymore, but it used to be big in 1920. I think it’s still exciting. In terms of bang for your buck, if you like talking to strange people and forcing people to identify whether they like to be recorded over state lines by telephone, what other field is there?

FM: On a different vein, you were named one of the “Punniest in Show” at the 2014 O. Henry Pun Off World Championship. What was the experience like competing there?

AP: Oh, it was spectacular. It was like what I assume what rooster fighting rings are like, where maybe these roosters didn’t hang out with a lot of other roosters—wow, I really didn’t think this analogy through before starting. But it was like, finally emerging among your own kind and then being forced to battle them to the death was sort of the feeling. But it was great, and all these people, [acted] like punning is a condition and a lifestyle. It’s one of those sorts of hobbies. I went to an international whistling convention and—it’s much more difficult actually, whistling than punning—and it was just...you need to be among other people who thought of language the same way, and it was also fun to watch what other people were coming up with, and great to be be validated in your insanity. I highly recommend it. It was neat for me because my entire routine that I won “Punniest in Show” with was both all the presidents in order and kind of feminist. So whenever things can be kind of feminist, but also involve William Henry Harrison, you know you’ve done something right.

FM: Did writing for the Hasty Pudding give you pun practice?

AP: Oh gosh, yeah. I got to the Pudding and was like, “Oh, yeah, these people also like puns. We can make puns together, we can be pun friends and get pun tattoos and have pun bracelets and go to each other’s pun quinceañeras and things.” It was definitely honing because, suddenly, there were a bunch of other people who were as serious as coming up with a weird pun for garden hoses or a pun for witches as you were, and you could shun your roommate, ‘cause you’d come up with a “Sadie Magicword” and all she’s come up with is “Madge E. Callhag” and you were like, “C’mon, Natasha, this is why you’re not in the Pudding with us.” You don’t get that in life a lot. Usually, people are like, “No, you’re a leper, you’re literally a leper. Your arm just fell off. Why are you still talking to me? Go get help.”

FM: Is there anything else you’d like to say about comedy at Harvard or elsewhere?

AP: It’s great at Harvard, it’s fun elsewhere, and check out my book, which is coming out in June 2015. It’s a humorous essay collection called, “A Field Guide to Awkward Silences.”

FM: Do you have any details on that that we could print?

AP: NAL/Penguin is doing it, unless they suddenly decide to yank out the rug, which I don’t think they will, because we’re editing it now, and we have a cover so it would be a shame to waste that cover. Coming out in June from NAL/Penguin and it’s a humorous essay collection. It’s like me doing sort of the David Sedaris thing. David Sedaris! That’s another human being who’s a cool influence. But yeah, if you like true tales of awkward living, pun-off, jeopardy, just a bunch of super strange scenarios I’ve gotten into with like high levels and flopped spectacularly, then this is going to be the book for you.